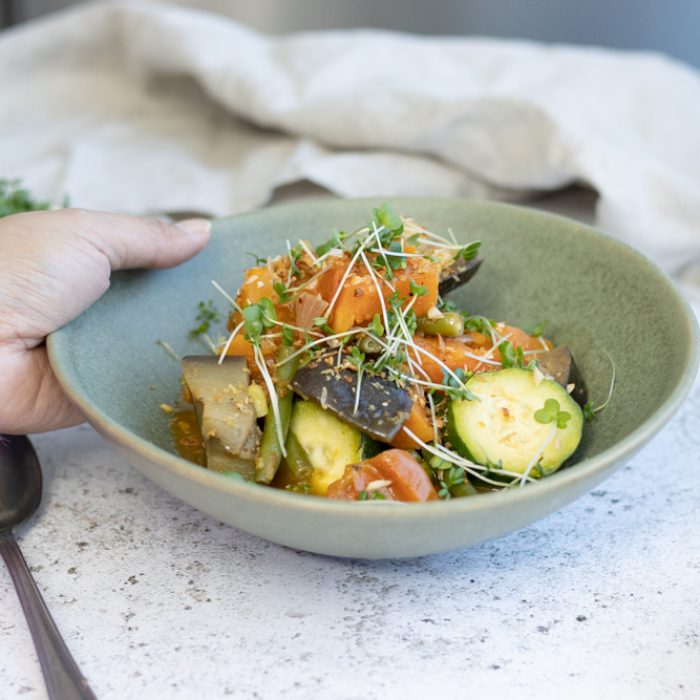 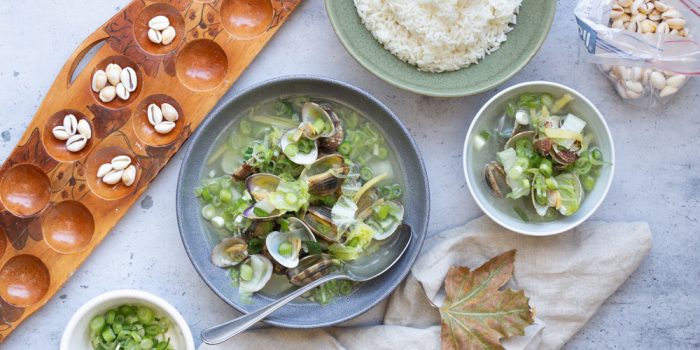 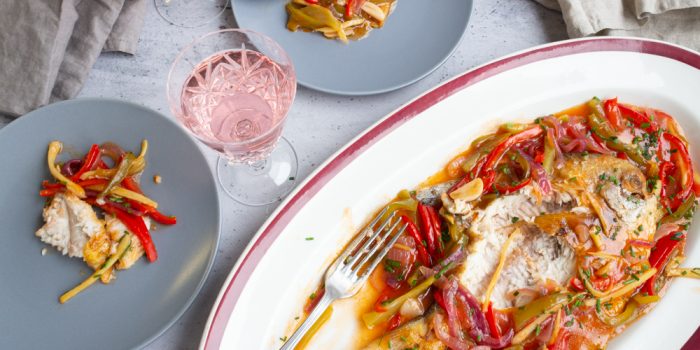 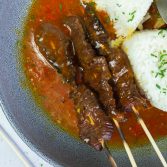 It’s summer in London now we are all gearing up for more Barbecue foods and chilling under the sun. I’m going to show you how to make this popular dish from Zamboanga, Mindanao, Southern part of the Philippines called Satti de Zamboanga.

It’s Beef or chicken barbecue sticks served with sweet & spicy gravy and some rice. I say gravy but Chavacanos literally drown their BBQ and rice in this stuff! HAHA

What is Satti de Zamaboanga

Satti is usually eaten as a breakfast meal, it’s normally Halal so that the Muslim costumers can eat too and is loved by the locals and tourists too. I don’t blame them as I think this is delicious!

It shares similarities with Malaysian and Indonesian Satay but the main difference is that Satti is served with the sauce or gravy on the bbq & rice and the most obvious thing that is missing it doesn’t necessarily have any peanuts with it. Although there are modern variations that have peanuts in them.

Satti is served with sticky rice uniquely cooked in a woven coconut leaf to create its heart-like shape. This is why it’s called ‘Puso’ meaning heart in Filipino language.

I haven’t visited Zamboanga but for a long time now, I am intrigued and fascinated by the food from the Mindanao region. I have done a lot of research online about this dish and watched videos on how they made it. Unfortunately, I haven’t seen anyone cook this in the UK yet apart from me. I hope I do justice and that I am being respectful to the Zamboangeños

Most of the ingredients in this dish are easily accessible and should be available in your local grocery store. For the beef I used minute steaks as I wanted them thin enough to reduce cooking time as well it being easy to eat. If you buy another cut, make sure you slice them thinly too, it’s easier to cook and not chewy.

I only added 1 chilli on my gravy as I didn’t want it too spicy so that my girls can enjoy it too but if you like it HOT you go add more chillies in your gravy.

For the thickening, I made a mistake in the video as I was panicking, the battery on my camera was dying and so I was quickly adding ingredients and didn’t realise what I was picking up on the side counter. But as I explained on the video if you add the annatto powder into the hot gravy it will create lumps as the powder is mixed with some cornflour (silly company!) So it’s better that you add the annatto powder in with the thickening mixture, cold water and cornflour.

What is annatto powder? Why do we add this?

Annatto is achiote and Filipinos got this from our Mexico counterpart during the Spanish colonisation through the Manila-Acapulco trading route. Locally known as Asuete, it’s a little nutty and peppery.  It’s mostly used as a colouring agent to Filipino dishes, probably just like the Mexicans. You can opt out of this if you can’t find any Annatto near you but if you want to add this into your gravy, I bought mine from either Chinatown, Wing Yip or Filipino grocery stores in Earls Court.

NOTE! If you can’t find annatto powder you can buy annatto seeds and make some annatto water instead. Boil 250ml water and add 1 packet of annato seeds. Once boiled turn the heat off, leave it on the side to cool down. You can use 100ml of annatto water for this recipe to use with the thickening ingredients. If you’re using annato water you don’t need to add an extra water for the thickening mixture. The remaining water can be kept in a container and store in the fridge.

I love seeing all of your cooking! Please rate my recipe if you use it and do tag me on instagram too @foodwithmae OR use my hashtag #foodwithmae . It would really make my day =) Thank you so much! If you have any questions please don’t hesitate to comment on here or message me.

For more Filipino recipe videos please check out my YouTube Channel and Subscribe if you haven’t already.

This recipe is based from these resources:

Jon to the world 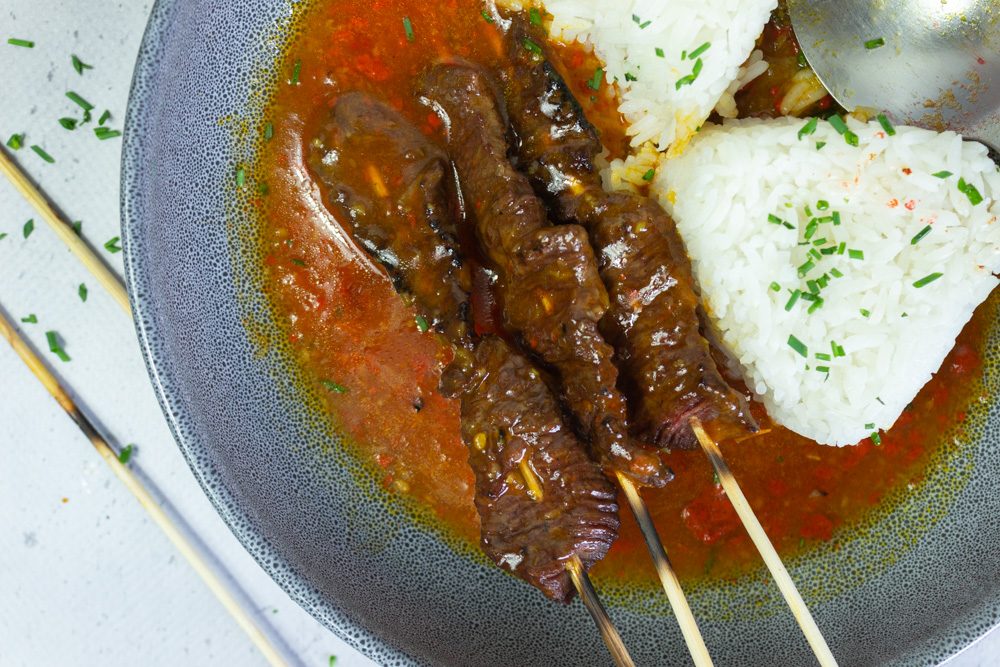 1
In a bowl add beef, garlic cloves, pepper and salt. Mix all the ingredients together until the meat is covered with seasoning well. Cover the meat with cling film and marinate it for 2 hours or overnight in the fridge.
2
To make the gravy, make the paste first, using a pestle & mortar or blender add tomatoes, ginger, chillies and onions. Blend or pound them together until they become a paste consistency. Put them aside for later.
3
Using a large pot, heat some oil and saute the satti paste for about 5 minutes. Pour some water and bring it to a boil on high heat. Once boiled, turn the heat to medium, add curry powder, salt, chicken stock, and sugar. Bring it to a boil or let this simmer for about 8-10 minutes on low heat.
4
In a bowl or glass mix the thickening mixture. In a bowl, add water, corn flour and annatto powder. Mix them together well until you don’t see any lumps in the mixture. Slowly pour this into the satti sauce while mixing the sauce at the same time. The gravy should thicken, turn the heat off and leave this on the side for later.
5
Take the meat out of the fridge, skewer them into the bbq sticks. Grill or barbecue them, cooking each side of the meat. Once the meat is cooked, serve them with some boiled rice and gravy either on the side or poured over the meat and rice.
Categories:BarbecueBeefSummer
foodwithmae 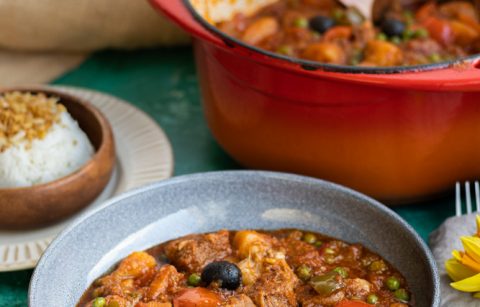 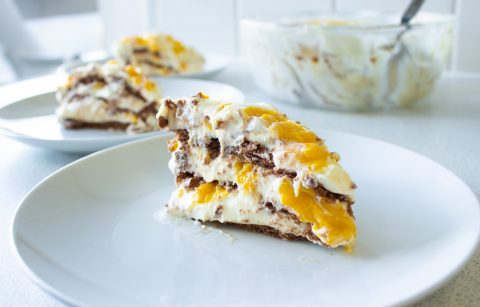 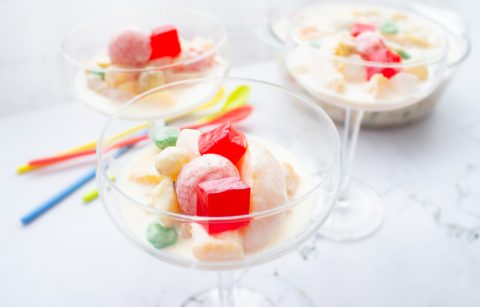